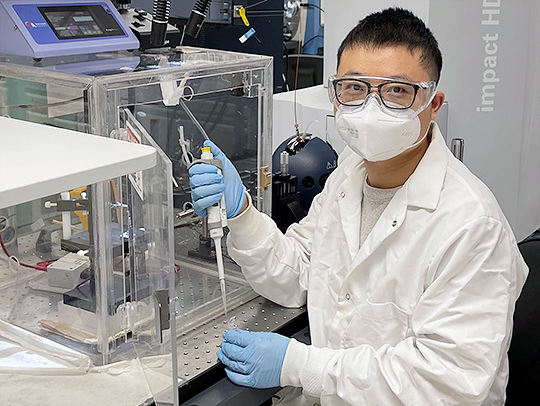 “One of nature’s wonders is how one fertilized egg, or embryo, develops into the almost 30 trillion cells that make up our bodies,” said Peter Nemes, associate professor in the University of Maryland’s Department of Chemistry and Biochemistry.

Jie Li, a fifth-year Ph.D. student in the Nemes Research Group, studies this embryonic process in frogs to understand the role of proteins and small molecules called metabolites during tissue formation. Because the frog embryos Li studies are genetically similar to humans, the findings from his work can potentially be applied to understand human development and diseases.

Earlier this year, Li used high-resolution mass spectrometry (HRMS) to measure metabolites and proteins in single cells from live frog embryos and then integrated these measurements with behavioral analysis of the developing organisms—demonstrating the first example of this type of research.

Because single-cell HRMS technologies previously required dissection or sorting of the cells, studying proteins and metabolites in single intact cells without disrupting the normal embryonic development had been impossible—until now. With a new technology called capillary electrophoresis high-resolution mass spectrometry, Li’s team made the impossible possible.

“We developed a new strategy with capillary microsampling that uses a microscope to identify the cell of interest and penetrate the cell with a capillary, which is a needle of sorts, to aspirate cellular contents directly,” Li said. “One of our big questions was whether the embryos that experienced sampling could still develop into fully functioning tadpoles. Our finding was that the tadpoles can behave the same way with and without the microsampling.”

These innovative research methods led the Angewandte Chemie journal to designate Li’s co-first-authored paper on the work as “very important,” a classification that less than 10% of manuscripts receive.

“I felt so honored to receive that comment from such a prestigious journal in our field,” Li said. “This shows that our work is being appreciated, and that’s a really great thing for this project and the ones we have to come.”

The new techniques have already generated a wealth of new data on proteins and metabolites in single embryonic cells as they are developing to form specific tissues.

Li’s experience in mass spectrometry began long before he arrived at the University of Maryland. He first used mass spectrometry as an undergraduate at Huazhong University of Science and Technology in Wuhan, China, and then again as a research scientist to conduct metabolic profiling in the pharmaceutical industry. He began his Ph.D. at George Washington University and then moved to UMD in 2018 with Nemes.

“The work in the Nemes Group is multidisciplinary. You not only learn how to do the science—you learn how to communicate and how to collaborate with different people,” Li said. “Dr. Nemes is very supportive of his students. He is always encouraging students to attend conferences and apply for awards. He really wants to see you have success in your career.”

Li is currently working on a project funded by a 2019 Cosmos Club Foundation’s Cosmos Scholar Award, a follow-up to a 2015 paper that found that injecting metabolites into a cell can change the cell’s trait.

“We’re trying to understand the underlying mechanism that controls this cell trait and makes the metabolite induce this change,” Li explained.

Though Li planned to return to the pharmaceutical industry after completing his Ph.D., his experiences at UMD and Nemes’ mentorship have opened his eyes to a wider array of career opportunities.

“One of Jie’s defining strengths is his ability to take major scientific challenges head-on. After all, combining chemistry, cell biology and behavioral biology is very uncommon,” Nemes said. “It takes courage, determination, and perseverance to work at the interface of chemistry, biochemistry and biology, and Jie’s got it.”