The Maryland Agriculture College, founded in 1859 with a faculty of four and an enrollment of thirty-four, was the beginning of the College Park campus of the present-day University of Maryland. Started as a private college, during the first sixty years college enrollment never exceeded two hundred, and was frequently no more than fifty in the period 1870-1885.

During the academic year 1866-1867 the College was closed due to lack of funding. However, money from the Morrill Act revived it the following year. For several years in the early 1880s, the College struggled to be a viable enterprise. Under President Parker (1875 to 1882) there were six professors teaching all of the college subjects (humanities, sciences, engineering, agriculture, and military science) to five seniors, five juniors, ten sophomores, thirty freshmen, and five pre-college students in the preparatory school. By 1883, President Parker and all but one of the faculty (the chemist) had been replaced, and the new titles of the 1883 faculty were as follows:

From this point on slow and steady progress was made. By the mid-1880s the most difficult years were over, and President R. W. Silvester (President from 1892 to 1912) was able to maintain a stable administration and steady growth. By 1894, there were 20 faculty and about 75 students, not counting 30 in the preparatory school. In 1891, H. B. McDonnell, M.D., B.S., became Professor of Chemistry and provided continuity and stability for the department until his retirement in 1938. Something should be said about the Chemistry Department prior to the McDonnell era. The College initially employed a “Professor of the Science of Agriculture, Chemistry, Geology, and Mineralogy”. No chemistry was taught until the junior year, and then Silliman’s chemistry was one of four subjects for students. No chemistry was offered in the senior year.

By 1865, three years of chemistry was offered beginning with the sophomore year. By 1870, the professor’s title was “Professor of Natural Science, including Chemistry and its Applications, Geology, Botany, and Mineralogy”. In 1873, the professor’s title was “Professor of Chemistry and Natural Sciences”. By 1876, there was a Department of Chemistry. In correspondence written on “Department of Chemistry” stationary addressed to President Parker, Professor W.D. Morgan explains how the seniors are analyzing water, gun powder, fertilizers, etc., the freshman are making satisfactory progress in inorganic and organic chemistry, but there is a lack of equipment so there can be no experiments (except in analytical chemistry where there is a $15 laboratory fee), there is only a small library, and he needs $900 for balances, furnaces, spectroscopes, desks, etc.

During the 1870s, freshmen studied organic and inorganic chemistry, qualitative analysis, detection of alkaline earths, metals, mineral acids, organic acids, use of blowpipe, and mineralogy. Sophomores continued the qualitative and quantitative chemistry, as did juniors. In 1881 chemistry was not taught during a student’s first three semesters. Students started inorganic chemistry during their fourth semester, and the succeeding semesters covered much the same material as before. This pattern of inorganic, organic, and analytical chemistry remained essentially unchanged for thirty years. In 1895, Professor McDonnell had four assistants working for him. Three of these assistants were analyzing feeds and fertilizers. This was the start of the State Inspection Service (becoming Division of Inspection and Regulation of the Maryland Department of Agriculture), and McDonnell was Professor of Chemistry and State Chemist. Chemistry appears to have been the outstanding department in the College. 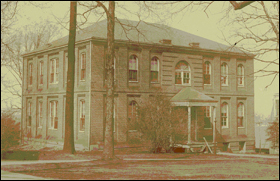 A chemistry building was completed in 1897 on the site of the present Millard E. Tydings Building, and this appears to have been the first building devoted to a single department. The forerunner of the State Inspection Service occupied the first floor, and the second floor provided room for the students. Each student had his own laboratory desk. They apparently analyzed a hundred substances by qualitative methods during their junior year, and the senior year was devoted to quantitative analysis with special emphasis on agricultural analyses: fertilizers, water, milk and feed stuffs. The catalogs for 1898-99 and 1899-1900 are well preserved: Morrell Hall (then called Science Hall) was completed; the College enrollment consisted of 14 seniors, all of whom graduated; 18 juniors; 28 sophomores; 21 freshmen; and 23 in the preparatory school; making a total of 104. The 1899-1900 catalog is the first with course descriptions. The sophomores had four lectures and three hours of laboratory based on Remsen’s general chemistry book. The juniors had lectures and many laboratory periods on qualitative analysis, mineralogy, Remsen’s organic chemistry, and qualitative analysis. The seniors had Remsen’s theoretical chemistry and laboratory work on the determination of molecular and atomic weights, organic analysis, and the analysis of agricultural materials. This catalog also contains the first mention of the Chemistry Library being in the Chemistry building.

The catalog of 1901-1902 has the first mention of post-graduate degree work. It was arranged on an individual basis, and chemistry is mentioned specifically as an area where such work is appropriate. A year’s work and a thesis were required for the M.S. degree. The M.S. degree program was firmly established by 1909, and the above requirements spelled out more explicitly. The original five-story college building, which served as both a barracks and classroom complex, was gutted by a fire in November 1912. The administration building next door was was also destroyed. To fight the fire, fire trucks with their horses were loaded on flat cars in Washington and rushed on the B & O tracks to College Park, but it was too late. The College managed to carry on in make-shift quarters, and the present Calvert Hall eventually replaced the barracks.

Physical chemistry was being slowly incorporated into the curriculum and finally became a separate senior year course in 1914. Jones’ “Physical Chemistry” was the text used. This same year saw the awarding of honorary degrees. Fletcher P. Veitch, Class of ’91 and Henry C. Sherman, Class of ’93 were awarded Doctor of Science degrees. Dr. H. J. Patterson became president of the College in 1914, Dr. H. B. McDonnell was Professor of Chemistry and Mr. L. B. Broughton, B.S. Class of ’08 and M.S. in 1911, was Assistant Professor. The latter stayed with the College until his death in 1943. During this period he was successively Head of the Chemistry Department (1929-1938) and Dean of Arts and Sciences. The College was growing in spite of the set-back caused by the fire; it now consisted of 130 undergraduates and 13 graduate students. The State took over control of the Maryland Agricultural College in 1914, and under a new charter in 1916 it became the Maryland State College of Agriculture. In 1919, it was the Maryland State College and the following year it merged with the Baltimore professional schools, and the University of Maryland was launched. Reorganization was in the air. The Maryland State College administration reorganized the existing departments so that chemistry became the School of Chemistry, on a par with seven other schools: Agriculture, Education, Engineering, Home Economics, Liberal Arts and the Graduate School. The Graduate School was started in 1919, and Ph.D. degrees were awarded for work in agriculture and in the natural sciences.

The School of Chemistry maintained its separate identity until 1921 when it was made part of the new College of Arts and Sciences. One wonders why chemistry had the exalted status of a separate school for three years. It was probably the result of two things – it was the strongest department on the campus and the importance of chemistry had been demonstrated and publicized in World War I. Dr. Neil E. Gordon, later famous for the Gordon Research Conferences, joined the faculty in 1919 as Professor of Physical Chemistry. He became head of the department in 1921 when Dr. McDonnell stepped down as Dean of the School of Chemistry and transferred to the Agricultural Experimental Station. Dr. Morris Kharasch, noted organic chemist who founded the Journal of Organic Chemistry, also joined the department in 1922, and Dr. Malcolm Haring joined a year later. Dr. Kharasch left in 1928 for the University of Chicago, but Dr. Haring was Professor of Physical Chemistry until 1944 when he left to join the Monsanto Chemical Company. Dr. Nathan L. Drake joined the faculty in 1926 and remained until his death in 1959. Dr. A. F. Woods was president of the University of Maryland from 1917 until 1926, and H. O. (Curley) Byrd was Assistant to the President for much of this time. The College Park enrollment was 175 in 1919, 325 in 1920, 937 in 1922, 1216 in 1926, 1410 in 1930, 2000 in 1933 and reached a maximum of 3944 in 1942 just before the draft took all the able-bodied men into the war effort. Under Dr. Raymond A. Pearson as president (1926 to 1935) with future president (1935-1954) Curley Byrd as his assistant, the University had the traumatic experience of passing through the Great Depression. Faculty salaries were cut without any consultation, the student body doubled, the chemistry staff remained about the same, and anyone who did not approve had the option to leave. Curley “endeared himself” to all of the faculty by saying English professors were a dime a dozen. The remark could be applied to all departments.

By 1928, the chemistry curriculum was fixed in a form which had few changes until the reorganization supervised by Dr. James Stewart in 1970. Freshmen took general chemistry, sophomores learned what silver chloride looked like by taking two semesters of qualitative analysis and a year of organic chemistry, juniors took advanced organic chemistry and a year of quantitative analysis, and seniors took physical chemistry and advanced organic laboratory. Graduate courses were added onto the undergraduate teaching load. Dr. Kharasch is listed in the 1924-25 catalog as teaching the following separate courses: Advanced Organic, Identification of Organic Compounds, Carbon-Hydrogen Analysis, Organic Preparations, Dyes, Carbohydrates, Synthetic Drugs, Selected Topics, and Research. Just as our colonial ancestors had iron men in wooden ships, Kharasch must have been a super chemist in a very inadequate laboratory setting. He was rewarded by being promoted to full professor in 1924 two years after coming to Maryland.

From 1929 to 1940, the permanent faculty consisted of Drs. D. B. Broughton, Head; Malcolm Haring, Physical Chemistry; Nathan L. Drake, Organic; Charles E. White, Inorganic, R. C. Wiley, Analytical and H. B. McDonnell, Agricultural Chemistry. In addition, there were ten to fifteen graduate assistants and fellows, and three instructors were added in the late thirties. One of these was Dr. William J. Svirbely who came in 1937 and finally retired as Professor of Physical Chemistry in 1972. Dr. Wilkins Reeve came in 1940.

Sylvester Hall was hopelessly inadequate for the enlarged department and three large temporary buildings (BB, CC, and DD) in the “gulch” (the area east of the main dining hall) were used for most of the instruction. Wings two and three were completed in 1951 and the Drake Lecture Halls were built in 1960. During the fifties and sixties, the University enrollment continued to climb from the 13,500 of 1950 to 35,000, and this required that still more faculty be added to the staff. Because of the increased enrollment and the enlarged staff, more additions to the chemistry building were needed; wing one was completed in 1968, and wing five (biochemistry) together with the Charles E. White Library were occupied in 1975.

The growth of the Chemistry Department following WWII is indicated below in a chart containing the number of theses completed as of 1968.

Graduate Degrees Awarded Up To 1968

Graduate Degrees Awarded Up To 1968

To the reader: This manuscript, now edited with some degree of severity, was found in a long discarded pile of papers. The author of the history is unknown, but those who have read the history have testified to its general accuracy. Does anyone know who wrote this history? Pictures in this history, most of which have come from the Special Collections of the University of Maryland Libraries, were added whenever possible to embellish the documentary. However, questions about the early history of the department remain. For example, why does this article state that wing one of the current chemistry building completed after wings two and three? (Note that the current wing three, completed in 2003, replaced wing three that was constructed in 1951.) We are looking for additional information about this era, and we welcome your reminiscences. In addition, we are looking for someone to write the portions, if not all, of the subsequent forty years of history for the department. Partial histories are also welcome.