Assistant Professor Osvaldo Gutierrez has been appointed the first Nathan Drake Faculty Fellow in the University of Maryland Department of Chemistry and Biochemistry.

Established through a gift from a grateful Terp, the faculty fellowship provides support for the recruitment and/or retention of an outstanding junior faculty member in the field of organic chemistry. The position is named for Nathan Drake, who served as department chair from 1940 to 1959. During his tenure, Drake created the Institute for Molecular Physics at UMD and oversaw a doubling of the chemistry faculty as student enrollment soared after World War II.

“Osvaldo was selected for this honor because his unique combination of computational chemistry and experimentation is transforming organic chemistry research,” said Department Chair Janice Reutt-Robey. “The mechanistic insights from his research laboratory have already led to new methods for the synthesis of fine chemicals and provided a blueprint for reaction development in the fields of iron and photoredox catalysis.”

“I was very surprised to be given this award,” Gutierrez said. “It’s an honor to be the first, of course, but to me, it really means recognition of our research group. In particular, it’s recognition to my graduate students and postdoc for doing all the work and to my mentors for guiding me to this point and beyond.”

Gutierrez’s research combines computational and experimental approaches to understanding and developing reactions that use iron as a catalyst to form carbon-carbon bonds. The reactions he and his team develop could be used to produce medicines more safely and cheaply than current methods. 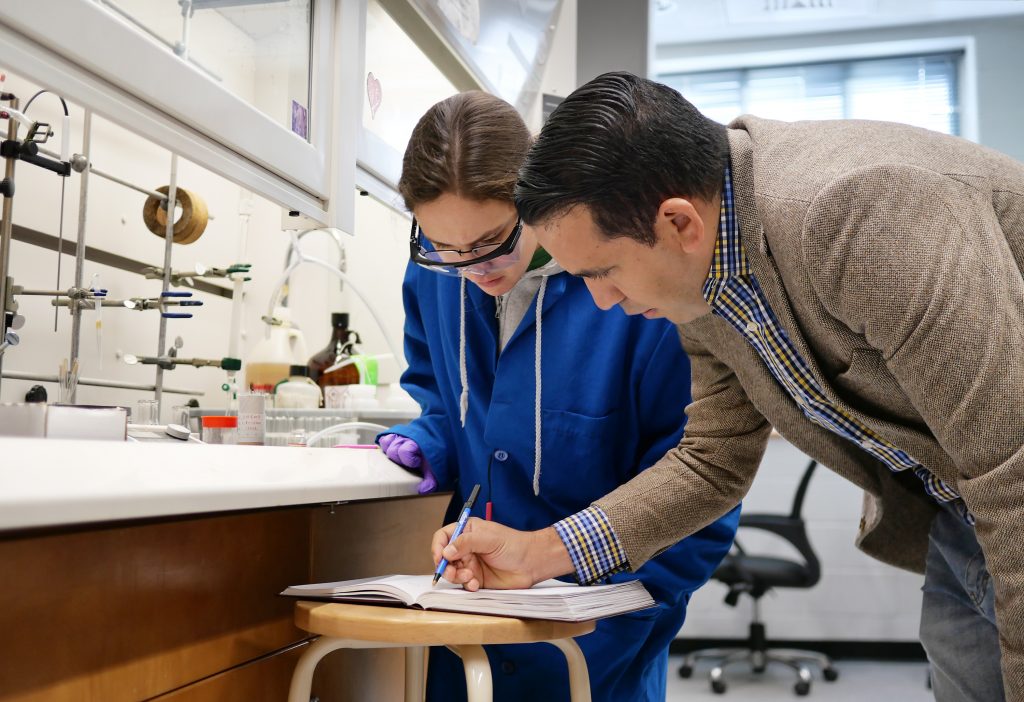 “Right now, in the pharmaceutical industry, the metal commonly used to catalyze reactions that produce these carbon bonds is palladium,” Gutierrez said. “There are a lot of advantages to using palladium: it’s well behaved and easy to characterize and monitor in the lab. But palladium is very expensive and toxic. You have to remove the palladium after synthesizing medications. Our goal is to replace palladium with iron.”

In addition to being nontoxic, iron is abundant and several orders of magnitude cheaper than palladium. Others have avoided using iron as a catalyst because it is highly reactive, difficult to characterize and challenging to work with. But Gutierrez is confident his team can overcome those challenges with a combined computational and experimental approach.

A purely experimental approach to understanding how iron compounds behave would require a lot of random trial and error. But Gutierrez uses supercomputers to first develop models that predict how atoms and molecules rearrange themselves during various chemical reactions. He then focuses his laboratory work on testing the predictions.

“With the computation, we can get rid of some of the trial and error and take a more hypothesis-driven approach,” Gutierrez said. “If we want to ask what will happen when we extend the carbon chain by one carbon atom, for example, we can test it computationally rather than having to make the compound in the lab and see what happens.”

Gutierrez’s lab is one of the few in the United States that combines computation and experimentation. He said the opportunity to do both is what drew him to UMD.

“A lot of people were skeptical that an organic chemist could really do both synthesis and computation,” Gutierrez said. “It’s a lot of work, and I spent an extra couple of years on my postdoc doing extra training to be able to do both. Here at Maryland, there’s a lot of mentorship. All around me, there are people in mechanistic chemistry, computational chemistry, synthesis, organometallic chemistry and theorists. I feel connected to all of them.”

His dual approach has already brought Gutierrez success. He and his team have shown that iron can be used to synthesize nonsteroidal anti-inflammatory drugs (NSAIDs) such as Naproxen and ibuprofen, which are frequently made using palladium. His group also developed methods for replacing palladium and other expensive metals in the manufacture of commonly used pharmaceutical compounds with quaternary carbon centers which consist of a carbon atom bonded to four other carbons.

In addition to his research, Gutierrez is passionate about increasing diversity in the chemical sciences. He started a UMD chapter of Alliance for Diversity in Science and Engineering (ADSE), which he said is open to anyone who feels they are underrepresented.

“It’s not just about skin color or gender,” Gutierrez said. “Many people feel underrepresented. Maybe it’s their background or a disability. ADSE creates an opportunity for people who feel their voices aren’t represented to get together and share their experiences.”

Under his leadership, the department hosts an ADSE Young Researcher Conference every fall. The conference features talks by both students and professors from underrepresented communities. In 2019, 120 students ranging from undergraduates to postdoctoral fellows participated. They represented 25 different institutions from small colleges to larger institutions within a 300-mile radius of UMD.

Gutierrez also developed a partnership with Prince George’s Community College. He brings a select group of students and professors to work in his lab every summer.

“I love the community college experience—the smaller, more intimate classes—but they are often lacking in the modern lab experience,” said Gutierrez, who began his college career at Sacramento City College in California. “That can put community college students at a disadvantage when they get to a four-year institution and start applying to grad schools.”

He hopes to bridge that knowledge gap and even the playing field for these students. So far, nine of his summer students transferred to UMD and three of them published papers as undergraduates.

Gutierrez’s dedication to improving the student experience, diversifying the UMD community and excelling at research made the decision to name Gutierrez the first Nathan Drake Faculty Fellow an easy one.