New faculty member will lead UMD into the field of exotic space chemistry.

With the arrival of Assistant Professor Leah Dodson in September, UMD’s Department of Chemistry and Biochemistry expanded in new directions. Dodson is a laboratory astrochemist, which means she studies the chemistry of interstellar space and the atmospheres around other planets. 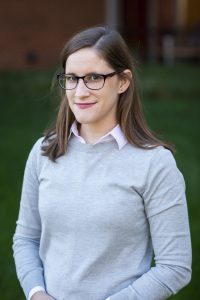 “We think of space as being empty and cold,” Dodson said, “but there’s a lot of chemistry that occurs in space. There are regions around dying stars, for instance, where material is leaking into space. In these regions, the density is higher and the temperature is relatively warm, say 50 Kelvin (-370 F) as opposed to absolute zero. In these conditions, exotic molecules can start forming. As a gas-phase chemist and a bit of a space geek, it’s really exciting for me to explore the chemistry going on out there.”

Dodson’s explorations will occur in the lab as she emulates the conditions of space and studies the behavior of different materials. Her work will contribute to the rapidly evolving scientific understanding of which molecules exist in space and how they react with one another.

“The University of Maryland is the perfect place for this kind of Chemistry,” Dodson said. “We have such a strong astronomy department and such a strong physics department, which has expertise in ion trapping and cooling technologies. In addition, we have an excellent atmospheric research department, and around UMD there are places like NASA and all of the government labs that are interested in this kind of chemistry. I think this department should have an astrochemist, and I feel very lucky to be that person.”

At UMD, Dodson’s research will trace two lines of inquiry. One involves creating reactions between ions and neutral molecules at temperatures that simulate interstellar space. The other will test the hypothesis that atmospheric conditions around other planets could enable acids to serve as catalysts to isomerization—the rearrangement of molecules—in ways that aren’t possible here on Earth.

For the ion-neutral molecule experiments, Dodson will study the reaction of magnesium cation with cyanoacetylene. Scientists have detected the product of that reaction in interstellar space, but the concentrations detected do not line up with model predictions.

“This reaction doesn’t occur on Earth, but we’re going to reproduce it in the lab and measure the rate constant,” Dodson said. The rate constant provides a way to quantify the rate of a reaction and predict the amount of product that should be created. “If the rate constant is different than the computational predictions, that tells us there’s something wrong with how that rate constant is being treated in the models. If we get the same number the theorists got, then we know there’s some other chemistry going on that’s missing from the model. Either way, we can contribute to what’s known about these reaction systems.”

The equipment required to create the reactions in the lab does not yet exist anywhere in the world, so Dodson must build it from the ground up. She will be isolating ions and molecules in an ultra-high vacuum chamber and cooling them down to about 4 Kelvin (-452 F) with techniques borrowed from quantum physics.

In her other experiments, Dodson will test theories about the role acids play in exotic atmospheres. In one experiment, she will combine sulfuric acid with the methoxy radical CH3O. In Earth’s atmosphere, CH3O forms whenever methane is oxidized, but it immediately reacts with oxygen. Some scientists predict that in oxygen-deprived atmospheres where acids are present, such as the atmosphere on Jupiter’s moon Europa, one of the hydrogen atoms could transfer to the oxygen atom, forming hydroxymethyl (CH2OH). If possible, that would be a very exotic form of chemistry in which the acid and the CH3O form a dual hydrogen bond that allows one hydrogen atom to slip over to the oxygen atom. That move would normally take a huge amount of energy.

Proving or disproving predictions about the potential for such exotic chemical reactions in space will certainly add to scientific understanding of space chemistry, but Dodson’s work may also be relevant to combustion engine technology. Both methoxy radicals and various acids are formed in combustion engines, which also produce tremendous energy. A more complete picture of the chemistry occurring between acids and hydrocarbon radicals will help engineers design for better fuel efficiency and pollution reduction.

Dodson, who focused on atmospheric and combustion chemistry in graduate school, said she is interested in pursuing applications of her work here on Earth as well, but for now, her primary focus is on setting up her new lab.

This fall, she is teaching a graduate course in quantum chemistry and recruiting graduate students to help form her research team. It’s no surprise interest has been high among her students.

“Space is exciting. It’s fun to talk about It, and it gets people’s imaginations going,” Dodson said, noting that a recent annual meeting of the American Chemical Society had to increase capacity for the talks on astrochemistry. “It’s a hot field with significant interest and funding.”